Eugene Is Ready For An Innovation District!

Here at the University of Oregon, the School of Planning, Public Policy and Management within the Institute for Policy Research and Engagement, has been studying the issue. The school and the institute are perfectly poised to research this issue because is an interdisciplinary organization whose goal is to create links within transportation, economic development and environmental sectors to help solve local issues and improve the quality of life for Oregon residents.

Developing an Innovation District will help the community prosper through investments in things the community cares about such as social services, education, arts, and affordable housing.

For anyone who knows Eugene and its history with its downtown, it’s no surprise that downtown has changed a great deal over the past several decades. In 1969, Valley River Center opened, which drew people away from the downtown core. In response, city leaders created the Eugene Mall, a pedestrian-only zone in the middle of downtown. The mall included restrooms, kids play areas and water features. By 1995, nearly all of the mall had been re-opened to automobile traffic, and by 2001, the remaining car-free zone had disappeared, and the downtown area looked much like it does now.

By and large, the downtown is now more vibrant and active than it has been in decades. But there are some negatives such as a perception among residents of it being a dangerous place due to homelessness and vagrancy. Now’s the time to build on the success we have achieved, and make a plan to address the negatives. The concept of an Innovation District will allow Eugene stakeholders to make a plan for the future based on everything about the downtown that could be considered an asset, and make a plan to improve the features that could be considered drawbacks.

The school and institute utilized those five elements to assess Eugene.

Critical Mass – The downtown core has a concentration of assets that are crucial to the success of an Innovation District. Upcoming investments such as the Knight Campus will contribute to that. There is a density of jobs in the area along with enough accommodations to attract a workforce. Eugene’s downtown core has high-growth job sectors, industry clusters, and access to alternative transportation. The assessment was positive about Eugene’s Critical Mass.

Innovation Capacity – The University of Oregon and Lane Community College are helping increase the awareness of and access to innovation in the downtown core through their business programs. Additional resources located downtown such as Rain Eugene, the Technology Association of Oregon, the Eugene Area Chamber of Commerce, Eugene schools, and Lane Workforce Partnership are also accessible from within the proposed Innovation District. While the assessment was positive about Eugene’s Innovation Capacity, it was noted that Eugene has a much lower rate of patents being issued when compared to the United States as a whole, and a somewhat lower rate when compared with the rest of Oregon. The UO recognizes this disparity and has a major effort underway to support research that can more readily lead to commercial applications. The soon-to-be-constructed Knight Campus will further develop this strength. 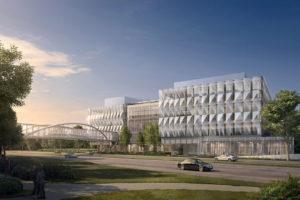 The survey shows that Eugene’s overall population, as well as its racial diversity, is increasing. And diversity is an important part of problem solving–a 2017 study conducted by the National Bureau of Economic Research shows that if women, minorities, and children from low-income families were to invent at the same rate as white men from high-income families, there would be four times as many inventors in America as there are today.

Quality of Place – Utilizing the leadership and vision of an Innovation District can help address issues such as housing, social services, and business support systems. Quality of Place also means having access to transportation options and being able to leave the work desk and easily go to a cafe, restaurant, or other off-work sites for meetings, which is easy for most workers in the downtown core.

Some key improvements in the downtown area over the past two decades are the construction of a new public library, LCC Downtown Campus, and LTD transit station. More food and cultural programs are taking place downtown than ever, such as summertime programs that bring music and art to public spaces. A high-speed internet network is increasing the potential of current and future businesses in that area.

Developments around the downtown core such as mixed-use developments near the Fifth Street Public Market will provide apartments, a hotel, and storefronts. The city of Eugene’s plans to develop the 16 acres of riverfront property that run right through the city (the former steam plant) will more effectively connect the city with the riverfront. And of course, the UO’s Knight Campus will connect the UO and the city as a whole with the greater global scientific community.

Leadership – While an Innovation District is a collaborative effort that does not require a plan, a planning process, or city council action, the process does need a core group to see decisions through based on the inclusive representation of key community interests. Eugene has formed a leadership advisory group for the Innovation District and that group is working on a plan.

The assessment noted what many people already knew or felt–Eugene does have the ingredients necessary for an Innovation District and there is already broad support here for this concept. Based on the criteria of the Brookings Institution and the assessment, here are the recommendations for next steps.

Overall, Eugene is ready for an Innovation District, and this report proves it.