RAIN Eugene Makes it Grow! Supporting Food Startups in Cottage Grove and Beyond

Micah Elconin, food and beverage management consultant with RAIN Eugene, has a simple message for all Lane County food and beverage industry entrepreneurs. “The greater Eugene area is the perfect place to grow your company,” he says. And it doesn’t even matter what stage you’re at in the startup process. From concept to established business, Elconin says RAIN Eugene can help.

In fact, RAIN Eugene brought in a food and beverage mentor precisely because there are so many food and beverage entrepreneurs in the greater Eugene area. The goal, Elconin says, was to “solidify Eugene-Springfield as a food and beverage capital. To strengthen the ecosystem, build workforce and assist with capital acquisition. Creating more connectivity in the industry,” he says. “We’re elevating the profile of the community.”

Elconin explains his role at RAIN Eugene fulfills two major functions. “We activate the startup community among members and would-be members. We’re trying to make more electricity between those folks,” he adds. “We provide the tools and the knowledge to make stronger entrepreneurs,” he continues, but is quick to add it’s the startups are doing all the hard work.

“We’re just there to coach, mentor and encourage,” he says. RAIN Eugene also advocates for startups on the state and regional level. “We put business startup at the forefront of conversation,” he continues. There are roughly 165 food and beverage manufacturers in Lane County, employing over 4,000 people and generating approximately 179 million in wages each year.

And an emerging hotspot for this industry is just south of Eugene in Cottage Grove.

“A number of the entrepreneurs in that area just so happen to be food and beverage related,” Elconin says, partially because there’s enough heavy-industrial and agricultural infrastructure in Cottage Grove to make it a perfect fit for aspiring food startups.

And several such businesses have launched recently in south Lane County, such as Sanity Chocolate. There’s also a Sustainable Cottage Grove, a food hub founded by Kim Johnson, who turned an auto garage into a functioning, food-safe kitchen that is attracting entrepreneurs from all over the state. Hot Winter Hot Sauce moved from Portland to Cottage Grove last year to work out of this space. 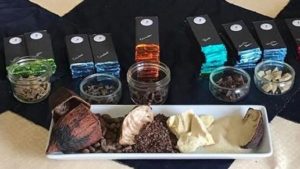 “They’ve all received direct support from RAIN Eugene,” Elconin says. “We host a monthly coffee meetup where I connect with the entrepreneurs,” in the Cottage Grove area. “They come to me when they have specific questions,” he adds.

One business founder who turned to support from RAIN Eugene early on is Joey Jaraczewski, founder of Sohr Performance + Nutrition. Originally from Arizona, he founded his company after completing an MBA at the University of Oregon to produce a plant-based protein shake. “We got to work,” he remembers.

Now, he says, Sohr has shifted focus to organic hazelnut milk production, a central ingredient in their shakes. Sohr also recently purchased another Cottage Grove-based start-up, Real Live Foods. “Real Live Food is a beautiful product,” he says. “We’ve grown it from being in 22 stores to 40 stores.”

“I came to Oregon to study plant-based food,” Jaraczewski recalls. “I spent a lot of time networking. Finding out what it means to make sustainable.” The kitchen at the Cottage Grove food hub provided the perfect environment for Sohr to get started. “What makes it work is partnerships with other small businesses,” Jaraczewski says,

“We had to self-manufacture the milk because of regulations and limited access to funding,” he adds. “We had to become manufacturers ourselves.” Early on, Jaraczewski says RAIN Eugene was a big aid getting his company off the ground. “I learned what question to ask,” he continues. “I learned to prioritize.” 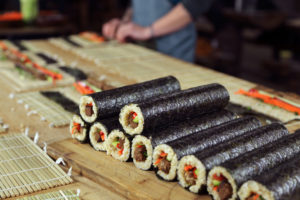 “The trouble with starting it needs to accelerate and accelerate fast,” Jaraczewski says. RAIN Eugene is working toward building Lane County food manufacturing infrastructure, and that infrastructure, Jaraczewski says, has a hand in attracting the capital needed to compete with established food and beverage powerhouses in California and elsewhere.

“I would go to RAIN Eugene before you get started,” he suggests. “It’s very easy and fun.” From someone who is already involved in a food startup, “it never hurts to go ask for help,” Jaraczewsk says. “You have to play it smart.”

And that’s where Elconin comes back into the picture.

“I’m readily available to anyone and everyone,” he says. RAIN Eugene hosts open mentor hours at different locations across town, he adds. “Follow RAIN Eugene on social channels,” he continues, to find out ways to connect with RAIN and others in the local food and beverage industry.