When we look around the country for examples of Innovation Districts, a few other cities stand out because of their similarities to the Eugene/Springfield metro area. Urban areas such as Asheville, North Carolina, and Huntsville, Alabama are similar in size to Eugene and have some of the same challenges of job and population growth.

The concept of the Innovation District has been gaining steam around the country lately, but the idea has been around for some time. In Europe, the first Innovation District began in Barcelona, Spain, in 2000. It took 10 years for that movement to take hold in the United States, in Boston. Within the last 8 years, dozens of cities have either become recognized as Innovation Districts or are trying to develop into one.

In Asheville in 2014, city officials approved plans to develop three areas of their city into Innovation Districts. Asheville focused first on its River Arts District, with a promise to devote tens of millions of dollars’ worth of grants, city-budget funding, and bonds for improvements along the city’s riverfront. 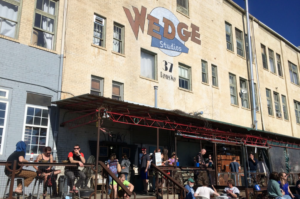 The River Arts District is a walkable area of nearly 200 working art studios alongside the French Broad River, which flows through town. The area was an industrial zone east of the railroad tracks with a glut of aging and empty warehouses–similar to what Eugene’s Whiteaker neighborhood was like a few years ago. The riverfront is now a vibrant, walkable area with “Studio Strolls,” artist demonstrations and a hop-on-hop-off free trolley.

Asheville’s Charlotte Street corridor and South Slope innovation districts are under development. South Slope is just south of Asheville’s downtown and includes a mix of breweries, arts, restaurants, residents and industrial businesses. Public input on this emerging area began just a year ago.

City leaders aim to make the Charlotte Street corridor more pedestrian-friendly with wider sidewalks and more trees. The city’s capital improvement plan allocates about $3.65 million for Charlotte Street sidewalk work over the fiscal years of 2015 to 2019. Public input will center on improved bicycle, pedestrian and transit access, roadway improvements and utility relocation, and just got started in 2018.

With a population of just under 100,000, Asheville supports a “business collision” center called The Collider, that is similar to Eugene RAIN. While The Collider provides common working areas and startup support, it is focused on developing businesses that are working on the issue of climate change. A physical place like The Collider is a key component of an Innovation District because it creates connections. It helps technology, human resources, and capital coalesce into something bigger.

Huntsville’s Innovation District is capitalizing on the city’s colleges and universities, research parks and business incubation resources in a similar way that Eugene is. At the University of Alabama in Huntsville, The Dorothy S. Davidson Invention to Innovation Center (I²C) is opening in early 2019. The 45,000-square-foot space will house resources for co-working, shared workspaces, business incubation, funding opportunities, and strategic support. The mentoring program at I²C is similar in concept to what we have at Eugene RAIN in that it connects experienced entrepreneurs, subject-matter experts and business professionals with the startup community.

The Catalyst Center for Business & Entrepreneurship in Huntsville helps startups and entrepreneurs take their solutions from ideas to reality. Their “Entrepreneur Boot Camp” helps plug people into the entrepreneurial ecosystem by introducing them to coaches, trainers, and other entrepreneurs. They even have a “Mompreneur” program where mothers can turn their multi-tasking, problem-solving, negotiating, chauffeuring, planning and budgeting skills into a business.

Huntsville is on the other side of Eugene’s 170,000 population with 196,000 people. Huntsville has several districts in close proximity, including the Lincoln Mill’s tech campus, the Merrimack District’s performing arts focus, The Lowe Mill District’s breweries and entertainment, 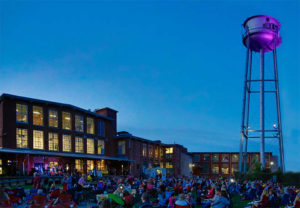 and the Medical District’s healthcare facilities. Huntsville’s 4,000-square-foot Cummings Research Park is the second-largest research park in the country and fourth-largest in the world. This zone has already attracted hundreds of aerospace, IT, telecommunications and biotech companies and continues to attract more all the time. An annual event called Innovate Huntsville is a week of events centered around entrepreneurship such as pitch competitions and investment forums. The city is actively working to promote the area as a “location of choice” for startups by maximizing what its districts all have to offer and encouraging ways for them to become even more by working together.

Of course, simply calling an area an Innovation District doesn’t make it innovative. But as these examples show, Innovation Districts and the thought processes and planning that goes into creating one provides a toolbox to manage growth and create a vibrant future.

In Eugene, we have many of the same opportunities that these other cities have, we just haven’t put them to their best uses yet. Reimagining uses for empty buildings, investing in infrastructure in ways that benefit the whole community, encouraging business development by prioritizing things like high-speed internet, maximizing the human resources that are coming out of our area colleges and continuing to bring people necessities such as healthy local food are all tools that we have in our tool belt. How they will get put to use is the big question that needs an answer.