Startup Weekend and ID8 Pre-Accelerator Are About to Kick Off!

Startup Weekend 2019 is about to start! Running January 18 through January 20 at Eugene Regional Accelerator (RAIN Eugene), Startup Weekend is the place to bring your idea to life within 54 hours. Many of the people who come to a business accelerator have an idea, but don’t have a business background. For the most part, people are looking for guidance in refining an idea and next steps for getting an idea off the ground. That’s exactly what you’ll find at a business accelerator like RAIN and you’ll find that in concentrated form at an event like Startup Weekend.

This event brings together resources to help those with a new business idea start searching for a team to build their idea, create a prototype, outline the challenges and opportunities of their idea, and talk with entrepreneurs who are farther along in their business development.

Get your tickets for Startup Weekend here! 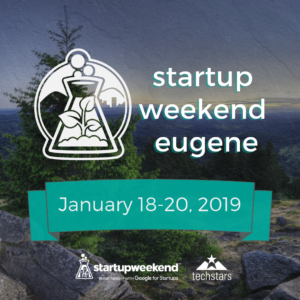 The focused 54 hours (Don’t worry! You get breaks and food!) begins with free Friday night pitch practice. The Pitch Practice Workshop on January 18 at 6pm is the place to deliver your pitch and get feedback. Experienced mentors who have pitched and understand the process of pitching will be there to help you effectively communicate about your idea.

After that, Saturday is a full day of finding a team and working with coaches on business plan development and basic prototype creation. For the finale on Sunday, you’ll take your idea all the way to a perfected presentation and winners will be announced at the end.

Lindsey Johnson, founder of Johnson Workwear, took her idea for tailored, feminine women’s industrial workwear brand to the RAIN Eugene Pitch Stream program in spring 2018, and she won the grant competition. “I learned about it through the University of Oregon and I applied,” Johnson says. “I was assigned to two mentors, John and Lauren [Jerome – a RAIN Eugene mentor in residence]. I came in with a business proposal and outline.”

She already had done professional photography and had a website, but she knew that selling the idea would come down to her pitch and her delivery. “They coached me on how best to pitch my business. I felt like they were really supportive and had a ton of confidence in me which I didn’t necessarily feel. I was a basket of nerves!” she recalled with a laugh.

Johnson learned about the technical aspects of a business proposition and presentation and researched statistics and trajectories that she wouldn’t have otherwise done. “It was awesome to get into the nitty-gritty of business analysis,” she says.

Before getting that help from RAIN, Johnson said she felt like she’d been winging it, but she came away with real knowledge and a plan for next steps to get her business off the ground. 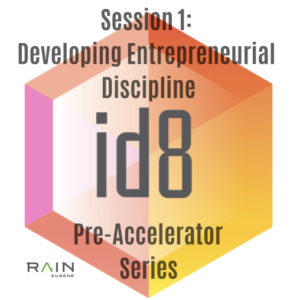 Following Startup Weekend on January 29, is the first session of the 5-week ID8 Pre-Accelerator program. The pre-accelerator is a preview of the 13-week accelerator course that starts later in the year. The ID8 sessions are on five consecutive Tuesdays from 6 to 8 pm with additional optional mentoring sessions. For the pre-accelerator program, participants are asked to have an Executive Summary which will be used in the workshop sessions. The first session of ID8 will cover topics of developing a disciplined approach to entrepreneurship.

In September 2016 Justin Bloom heard about the ID8 program. He had a business idea to create an app to help wine lovers easily access information about Oregon’s several hundred wineries. “Someone suggested that I talk to the people at RAIN and they said, ‘Hey, we have these ID8 sessions coming up,” Bloom said. “I went to all the evening sessions and quickly realized that, even after being an executive in a tech company for almost 13 years, that there are so many elements to not just running a business but planning a business that I didn’t know about. For me the great thing was that there is a kind of community that gathers at RAIN and ID8 is a great introduction.”

After going through ID8, Bloom applied for the RAIN accelerator and completed that two years ago. Through that, Bloom was able to refine his original app idea, which would have been difficult to monetize, into a new business model called BitCork. “We’re using tech to connect artisan wineries and restaurants,” says Bloom.

When restaurants use the mobile app, they get to see videos and information about artisan wineries and when they place orders, bicycle couriers do the delivery from a tiny basement space in downtown Eugene. Bloom says RAIN is such a great resource because most of what is available is totally free, and there’s no pressure.

“Without going to RAIN and without having those different perspectives asking me how does this make money as a business, I have a feeling that I would just be spending a whole bunch of time figuring out that it would be really tough to grow,” he said. “If I had done my original idea, I would have never gotten connected to the other BitCork cofounders and I wouldn’t have had the refinement of the idea and the evolution of the idea into something that could actually attract investors.”

Max Chung utilized RAIN’s resources to turn his concept of a case to protect video game controllers for professional gamers into a business called Light Shield. Chung, a UO business school senior, originally started school with the intention of becoming a mechanical engineer. He also played a competitive video game called Super Smash Bros., and when he would travel with his video game controller he worried about it being damaged. “I looked all over online and there wasn’t anything that met my needs, so I finally decided that I was going to make my own,” he says.

Chung taught himself to use a 3D modeling program called Inventor to create a carrying case for the controller and cord. That’s when he got in contact with Kate Harmon, undergraduate program manager and instructor in the UO’s Lundquist Center for Entrepreneurship. Harmon also recently led a free business proposal workshop at RAIN as part of the events leading up to Startup Weekend.

Harmon pointed Chung in the direction of RAIN, where he learned about ID8. Chung wrote an executive summary—a one-page overview of a business’s market size, the problem it’s addressing, the solution, opportunities, executive team, and funding—and took that and his case prototype to ID8. “I didn’t really know anything but in the second hour you get to talk to mentors about your ideas,” says Chung. “It was so fun and I met all these different people. You leave with all these different leads of who you should talk to next, all these different trails to follow.”

For ID8, participants are asked to prepare the executive summary first, because that is what the mentors will read and will build the foundation of their advice from. “You have five or six people comment on your exec summary and then all of a sudden your inbox goes from zero to 100 things to do next,” Chung says. Chung’s biggest challenge has been procuring the raw materials for manufacturing the cases and actually producing them in an affordable way. Chung left ID8 armed with numerous leads that he followed up with, and he also went to three pitch competitions.

“I highly, highly recommend ID8 and RAIN, especially for people who aren’t from Eugene like me and don’t already know everyone and if you haven’t already gotten into the startup ecosystem,” Chung says. “You meet a bunch of people, they give you a lot of great feedback, and it’s a great way to start. What I got out of ID8 was I got to meet all these great people, it was super fun, and I got really hyped to do this business.”