Swallowtail Spirits Grows With The Help Of The Eugene Regional Accelerator

Kevin Barrett, founder of Springfield’s Swallowtail Spirits, already had his product on the market when he applied to be part of a Eugene Regional Accelerator cohort a few years ago. He knew he had more to learn about starting a business, so he joined the 12-week Accelerator program that provides training to early growth-stage companies.

“I was there all day, every day taking in as much information as I could,” Barrett said. “When I think back, which was basically three years ago, what has happened in those three years is absolutely amazing.”

Now, Barrett has a production space and tasting room in Springfield’s Thurston area 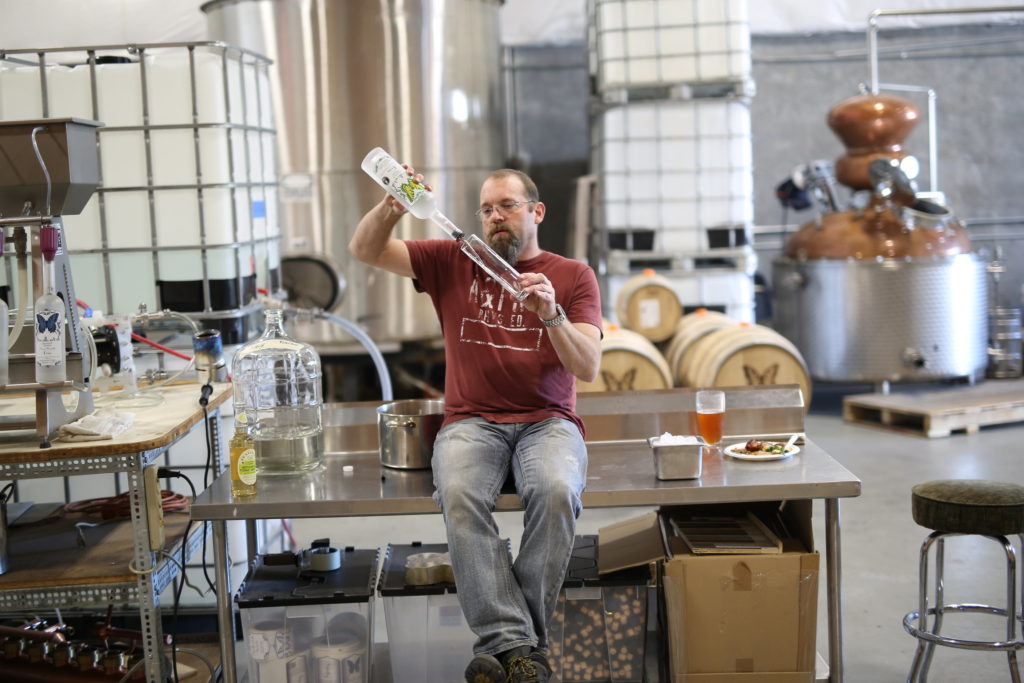 and is renovating a new location on Main Street that is set to open later this year. He sells his spirits in liquor stores throughout Oregon and has expanded to California, Washington, and New York. He has also shipped his spirits to distributors in Dubai. Barrett produces vodka, a variety of gins and multiple flavored vodkas. He has also created a collaborative Irish whiskey using Ninkasi Brewing’s Oatis Stout. Swallowtail has received multiple international awards for its small-batch craft spirits.

Barrett credits the Eugene Regional Accelerator with providing him the knowledge to seek the funding that has allowed his business to grow.

“We’ve been really lucky at getting the funding that we have,” Barrett said. “I had no idea how to do any fundraising before. I had no idea what types of documents the banks were going to need. Through the Accelerator, they pretty much set you up with knowing all of that by the time you leave, if you pay attention to it.”

The Accelerator program gathers entrepreneurs and mentors in one space to support one another.  The program helps founders develop the skills they need to sell their product by guiding them through team development, marketing strategy, and operational planning. The curriculum includes lessons from experts in marketing, startup accounting, product design, user testing, law and more. The program then prepares founders to create presentations to raise capital and connects them with investors.

Barrett said the cohort was like taking an MBA crash course in 12 weeks. With all the information being provided, he focused on the topics he knew he needed help on, such as business forecasting. He also worked on his elevator speech so he would be prepared for meetings with investors. In January 2016, at the end of the cohort, Barrett made a pitch to investors and gained investors in his business. Shortly thereafter, Barrett opened his location on Highbanks Road where he distills his spirits. 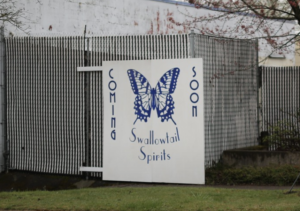 He is renovating the building, which was built in 1907, into a 1920s speakeasy. Barrett said he chose the location for its marketing opportunities and hopes it helps him garner better brand awareness in the Eugene-Springfield metro.

“It’s the gateway to Springfield,” Barrett said. “It is the very first building that you see when you’re coming into town.

“After almost five years I was tired of driving around town and people would be like, ‘What’s Swallowtail?’” He added. “… Nobody says, ‘Who’s Planktown?’ It’s a very well-known establishment … This hopefully will gain that type of notoriety.”

His tasting room on Highbanks Road remains open on Saturdays. But Barrett is spending much of his time either distilling or working on construction projects at the Main Street distillery. He has cleaned the oil out of the floor at the new location and plans to reframe all of the original windows. Along with help from a contractor, he is building a fence using recycled panels. Barrett has also refurbished several pieces of art deco furnishings for the distillery, which will feature a large copper bar, indoor seating and a fenced yard with concert space.

Barrett was seriously injured in January when he fell from a ladder while working on renovations. His mother created a GoFundMe to request donations for the construction project, but Barrett insisted he didn’t need money, he needed volunteers. The request led to several volunteers who have helped with construction projects.

A three-day Gatsby-themed grand opening is planned for later this year and will feature swing dancing, gin and whiskey workshops, bartender cocktail challenges and a concert performed by the Cherry Poppin’ Daddies. Swallowtail Spirits will retain its location on Highbanks Road for now since it has a larger production space than the distillery on Main Street, Barrett said.

Throughout this experience, Barrett has returned to the contacts he made through the Eugene Regional Accelerator for financial advising, advice on forecasting and help on expansion loans for new equipment. He has also helped mentor new business owners completing the Accelerator program.

“I surrounded myself with the right people due to my involvement with the Accelerator,” he said. “It has been invaluable.”