The Accelerator Helps Solar RainFrame Charge Into The Future

What do the roof at the SeQuential Biofuels filling station in Eugene, the covering over the electric car charging stations at Lane Community College, and the awning at Hummingbird Wholesale near Skinner’s Butte all have in common?

Each has a rain shedding canopy made of solar panels that was custom built by Solar RainFrame Inc., a Eugene-based company that makes elevated solar structures.

The idea was conceived a decade ago by solar electric designer and installer Vince McClellan. The president of Solar Energy Design, McClellan sought a product that would work with nearly every common solar panel on the market and that would have fewer parts to assemble than existing products.

“Vince had been building a number of (elevated solar structures) and the methods and products that were available at the time to do this was expensive and the product-based solutions had a lot of small parts and also utilized rubber gaskets that were fit into these little frames and it just didn’t work very well,” said Matthew Robertson, Chief Operations Officer at Solar RainFrame and a graduate of the Eugene Regional Accelerator business cohort. “So he came up with this idea that the rails that support the solar panels are also gutters.”

In 2010, the first Solar RainFrame project was constructed at the SeQuential Biofuels station on McVay Highway. The 244-panel solar canopy covering the fueling islands provides 30-50 percent of the electrical power for the stations. Solar panels were a clear choice for the company, which sells biofuels produced regionally from renewable and clean-burning sources.

“A lot of people who go there frequently don’t even know it’s a solar array,” Robertson said. “It was kind of like the first prototype. It was built using just off the shelf materials that were available at the time and it was rather complicated, but it proved that the idea worked.” 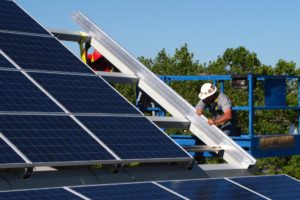 The Solar RainFrame project being constructed at Lane Community College

One of Solar RainFrame’s biggest projects yet has been at Lane Community College. A 36-kilowatt solar station in the west parking lot feeds renewably generated power into the school’s electric grid and shades nineteen electric vehicle charging stations.

“That came about because the sustainability director at the time wanted to put electric car chargers in that spot and then decided that it would be really great to have solar to provide power for those electric car chargers,” Robertson said. “The engineer who was working with them knew about [Solar RainFrame] and said there’s this product that, without any other changes to the design, could make this giant canopy structure shed water. So they approached us and we worked with them on the design and incorporated the product into it.”

Solar Energy Design hired Robertson in 2018 to design solar projects and produce computer-aided design drawings for the permitting process and construction. But after learning that Robertson had an extensive background in manufacturing, it was decided that he would also manage the daily operations of Solar RainFrame.

“I had no idea anything like it existed,” Robertson said about hearing of Solar RainFrame for the first time. “At the time, there was no marketing for the product.”

Since then, Robertson has made adjustments to the design when needed. The original rail design created a hollow space where small animals could potentially nest. He created a new design based on an I-beam to eliminate that concern. 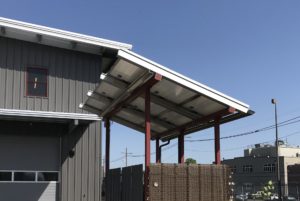 In all, about 17 Solar RainFrame projects have been completed so far. All but one were in Oregon; a Solar RainFrame carport was installed at the Hoopa Valley Tribe community center in California. Other completed projects include a canopy in the parking lot of Eugene’s First United Methodist Church and the cover of a trash enclosure at the Mahonia Building on Shelton McMurphey Boulevard.

Robertson said Solar RainFrame has eight projects in progress, including a covered deck with a Solar RainFrame canopy at the Eugene Science Center, which is in the permitting process. Another project in the works is a private barn to store farm equipment, which will have a Solar RainFrame roof.

To help him further build the Solar RainFrame business, Robertson participated in the Eugene Regional Accelerator’s summer 2019 business cohort. He said the four-month collaborative training for early growth stage companies taught him how to switch from a manufacturing perspective to a business perspective when necessary.

“It was an understanding that I needed to be able to have a different mindset depending on how I was looking at things,” Robertson said. “And then going to people who had been in and actively part of the startup scene to learn how to, when appropriate, shift my mindset from product perspective to business perspective and then make decisions based on that.”

The cohort also helped him develop a framework for marketing his product. He learned how to build a persona of the individual he is marketing to and then create a specific marketing approach based on those personality traits. This helped him differentiate between marketing to businesses and marketing directly to consumers.

“It’s been pretty instrumental,” Robertson said. “Before the RAIN cohort, I didn’t really know anything about marketing.”

The cohort also helped him learn how to use LinkedIn to promote Solar RainFrame. In order to build brand recognition, he has been posting articles to LinkedIn about Solar RainFrame that can be shared.

“I’ve gotten feedback from people who say they think the idea behind the product is absolutely amazing,” he said. “So just building that awareness is what I’m focusing on.”