The owner of a bike delivery service and the founder of a business that connects restaurants to artisan wines walked into the RAIN Eugene Startup Coffee Meetup.

Every third Thursday of each month, RAIN Eugene hosts a meetup from 9 to 11 a.m. for local entrepreneurs to meet and network over coffee. The coffee is delivered by bike from local Equiano Coffee Company by Michael McKern, an owner of Cascadian Courier Collective.

One Thursday last year, Justin Bloom, owner of BitCork, saw Michael’s cargo bike resting in the RAIN entryway and got an idea. BitCork partners with small wineries to bring artisan wines to restaurants in Lane County. 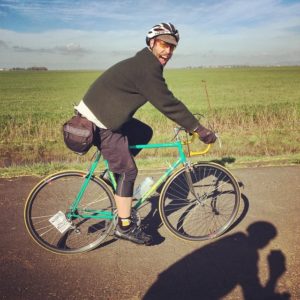 “They were seeking a solution for transporting their goods and they saw the cargo bike that we bring all the coffee in on and make it seem effortless and they thought that would be a great setup for them,” Michael said.

Now when a restaurant that partners with BitCork requests a shipment of wine via the BitCork app, the couriers who work with Michael get a notification with an order and a code. A courier will go to BitCork’s warehouse on Willamette Street and enter the code into a lockbox. They tap the order into an iPad and lights in the warehouse illuminate the wine bottles to be included in the delivery. The courier puts the bottles into a box, delivers them to the restaurant and returns with a check.

“It makes it happen really, really fast,” Justin said. “For us, bicycle couriers make all the sense in the world.”

Michael grew up in Eugene and worked for another bike delivery service in town before founding the Cascadian Courier Collective in 2013. The couriers deliver food to customers from partnered restaurants for a $3 delivery fee or from any other restaurant in their delivery zone in Eugene for an $8 delivery fee. Their partnered restaurants include Ubon Thai Kitchen, The Barn Light, Falling Sky Brew Pub and many more. The couriers will also deliver food, coffee and more for businesses catering meetings.

“So we’ll go and pick them up and charge them on our company card and the customer can pay us back at the time of delivery for the food cost plus the delivery fee,” Michael said. “Wherever they’re at we can basically be an extra person on their team and try to help them out as much as we can by getting stuff they need around town.”

The Cascadian Courier Collective’s services extend beyond food delivery. They’ll deliver groceries, packages, college papers, pet food, legal documents and more. They also collect flyers and other promotional materials from organizations such as the Eugene Symphony and distribute them around town.

“We try to get people interested and try to target demographics for them,” Michael said. “If it’s a Young the Giant show for McDonald Theater we’ll go to campus and get it up on the poster boards and keep coming back and making sure that they stay up.”

Michael started attending the Startup Coffee Meetups after being invited to deliver the coffee by Lane Food and Beverage Sector Strategist Micah Elconin. Michael said he likes the gathering because he gets to meet different segments of the community and it’s always changing. It’s never the same meeting twice, he said.

“You all share a love of community and the kind of culture that surrounds people who are doing new and interesting things,” Michael said. “You can always feel free to talk about pretty much anything with these people … I wouldn’t say it’s too different from a family, honestly.”

He said he plans to attend RAIN Eugene’s open mentorship hours to discuss ways to further expand his business.

Justin was the chief technology officer for a telecommunications company in Eugene for 12 years. He was in the RAIN Eugene’s business accelerator cohort in 2017, where he met BitCork cofounder Todd Edman. Justin had built an app that listed all the artisan wineries in Oregon, hoping to draw attention to them. Todd was running a business making staff training software for restaurants. Together, they wanted to help boost the sales of local artisan wines in restaurants. 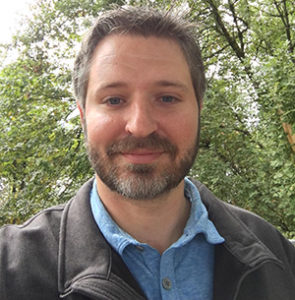 “So we hatched this up,” Justin said. “(Todd) went out and talked with some restaurants and pretty much every one of them said we’d do this. These are the wines we want.”

He said the vast majority of wineries in Oregon don’t make enough wine for large distributors to be interested in them, which leaves restaurants without access to them. The goal is to help local restaurants carry small production local and artisan wines that can’t be found at large grocery stores and that hold a high value for guests. Currently, BitCork partners with 21 restaurants in Lane County.

Justin said working with the Cascadian Courier Collective for wine deliveries has been great. They provide quick turnaround via an eco-friendly service.

“It’s totally a testament to the power of RAIN Eugene,” Justin said. “Really just about all the connections that allowed this to pull together were made here.”

The Cascadian Courier Collective expanded into Portland last year with half a dozen independent contractors making deliveries there. BitCork is currently seeking a warehouse in Portland for its wine and will partner with the couriers in Portland to make deliveries to restaurants.