What’s the Difference Between an Opportunity Zone and an Innovation District?

An Opportunity Zone is a separate but related concept that could help provide the opportunity, no pun intended, to develop Eugene’s Innovation District.

Opportunity Zones, or, for simplicity OZs, are a new concept codified by the federal government in response to the recession that hit the country in 2007. While most communities have recovered fairly well, there are still a lot of economically depressed areas of the country that never completely rebounded. According to Site Selection magazine, a business publication covering real estate and economic development, as of the end of 2016 less than one-quarter of U.S. counties had re-acquired all of the businesses that were lost due to the recession.

The IRS developed the OZ as a tool for investors and community developers to create tax-deferred zones to help spur economic growth and create jobs. The IRS added OZs to the tax code on December 22, 2017 in the Tax Cuts and Jobs Act. The first OZs were designated on April 9, 2018, and more have since been designated in all 50 states, the District of Columbia and five U.S. territories.

In Oregon, Governor Kate Brown nominated and selected 86 OZs across the state, including three in Eugene and two in Springfield.

What is an Opportunity Zone?

By IRS definition, an OZ is “an economically-distressed community where new investments, under certain conditions, may be eligible for preferential tax treatment.” According to the IRS, areas qualify as Opportunity Zones if they have been nominated for that designation by the state and that nomination has been certified by the Secretary of the U.S. Treasury.

How do Opportunity Zones work?

At its core, an OZ is a tax relief program.

That’s all IRS speak meaning it’s an incentive for investors to pour their money into medium- to long-term investments in economically disadvantaged communities. As those purchased assets (stock, land, etc.) increase in value, the taxable amount shrinks based on how long the investor held on to the investment. That’s money in the investor’s pockets, while meanwhile, the community gets the benefits of having a low-income apartment building, an office building, or another community asset that probably wouldn’t have been created had the investor not had the tax incentive. 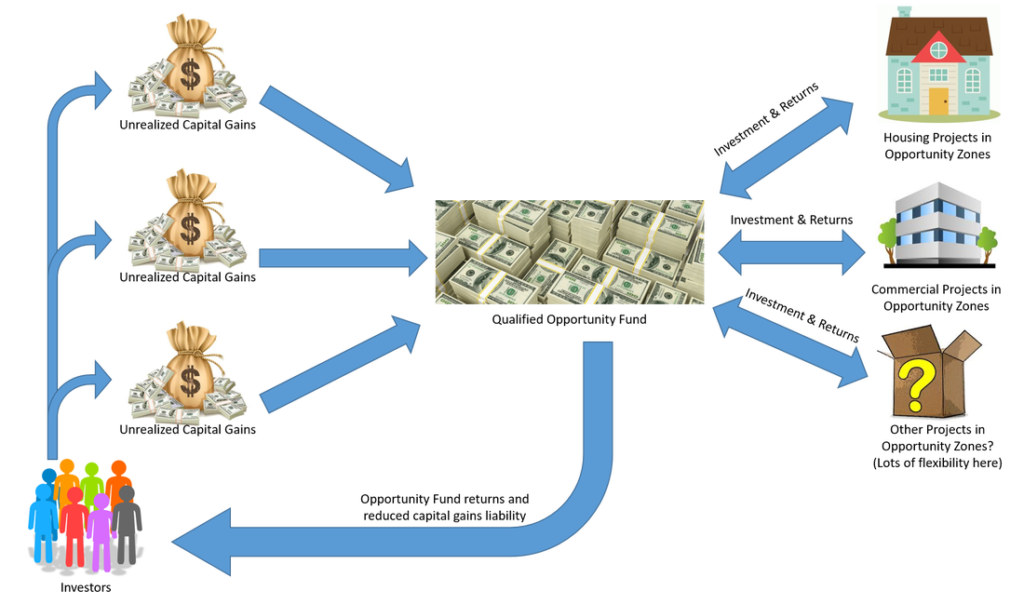 This IRS program will allow any taxpayer to defer paying tax on capital gains from the sale of assets (including stock) if those gains are invested in QOFs. Further, these investors must devote 90 percent of their assets to businesses located or property used in a low-income community.

Investors do not have to live in the OZ in which they invest. And, a corporation or partnership or an LLC that is considered either a partnership or corporation for federal tax purposes can become a QOF by filling out Form 8996, Qualified Opportunity Fund with its federal income tax return.

The markets represented by OZs are considered emerging and have a measurable potential for growth. These markets are primed for growth but for whatever reason have been left behind by the post-recession recovery effort that other communities got.

56 percent of OZ residents in the 50 states plus DC are minorities. More than three-quarters of certified OZs lie within metropolitan areas but are pretty well evenly split between high density (urban) zip codes and low density (rural) ones. 294 OZs contain Native American lands.

How does an Opportunity Zone work along with an Innovation District?

Now that OZs have been selected and defined, the next step is recruiting investment. That’s also a key point in developing the Innovation District. An Innovation District also represents an area that has potential it’s not currently maximizing. Better serving the community in the ID could mean developing an office building with high-speed internet so that startups have an affordable place to take hold and grow—meaning, of course, that they can employ people.

One great example of this coordination would be developing an apartment building so that the people who work at those startups can live in an affordable building close to where they work. It means investing in public transportation so that those employees and everyone else in the community has an easy alternative to driving automobiles. It means investing in more sidewalks and better bicycle lanes so that pedestrians are safer. It means bringing people together for events that are fun, informative and increase connections between members of the community. These are all mutual goals of both the ID and the OZ, and both can grow as fast as the investors are willing to take a chance on them.