Young Mountain Tea was honored to receive the 2018 Best Sustainability Initiative at the annual World Tea Expo in Las Vegas. “We see this award as a vote of confidence from the industry we are a part of,” said Raj Vable, founder of Young Mountain Tea.  “This is an honor we need to live up to.”

Young Mountain Tea was recognized for creating the Global Tea Exchange – a program intended to build India’s next generation of tea producers. This spring Young Mountain Tea selected the first Global Tea Fellow, Desmond Birkbeck, and organized a hands-on training at one of India’s premier tea making and educational facilities. Desmond has since returned to his family’s tea garden in the Kumaon region of India and begun to incorporate new practices to raise the quality of his teas. 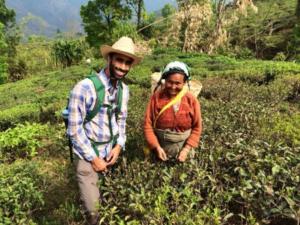 Founder Raj Vable, in India working with one of the local tea farmers that is part of the Global Tea Exchange

The Global Tea Exchange fits into Young Mountain Tea’s mission of creating a community-centric model of tea. Since 2013, the company has been working across the Himalayas to transform the tea industry in favor of mountain farmers in India and Nepal. They see tea as a way to catalyze the growth of resilient mountain economies.

According to Vable. “Our focus is on creating sustainable livelihoods for mountain communities, in whatever form that takes. For example, in addition to selling tea, we also organize trips to our partner’s tea gardens. Through homestays and workshops, participants get an immersive experience into the life of a Himalayan tea farmer. This diversifies tea farmer’s income while also closing the gap between producer and consumer.”

Young Mountain Tea was inspired by Vable’s experience as a Fulbright Fellow in 2013. While working in rural development in the Kumaon region of North India, he made a promise – if local communities would grow tea, he would buy it. Later that year he returned to Oregon, where he had previously completed his graduate studies, and setup Young Mountain Tea.